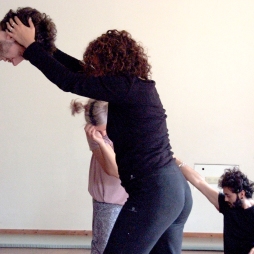 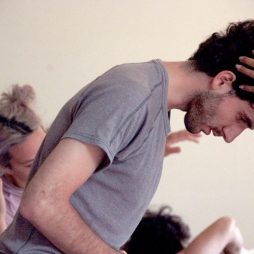 „I Never Promised You A Rose Garden“is the title of Hannh Greens book from 1977. Its a report about a healing process of a 16 year old girl brought into psychiatry after a failed suicide.

For some reason the title of this book has stayed in my mind since I read the story many years ago. The title symbolizes for me certain moments in my life when I had to make decisions. I mean a certain decision that „costs“ me something. The title also stands for me for the freedom of personal and individual choice, beside the fact that everybody’s position and perception inside a context might be different.

In general I am convinced that everybody is capable of using her or his emotional or cognitive intelligence to make a decision.

Why writing about this?

Because for me it is obvious that personal growth and artistic development aren’t always a „Rose Garden…“ – I have to face and explore also sometimes the shadow to achieve the light! And in a perfect world it’s me who is making the decision.

In my understanding of facilitating a creative process there will be always important moments of making decision personally and group wise. And in a creative group process – especially if a part of the goal is about facing a public audience –, this needs to be negotiated in a more complex way because of different personal needs and conditions. And negotiation needs a developed group language in a tri-lingual and highly sensitive and emotional context of an esthetic work.
That’s why from the first day on we consciously cultivated the group language by dealing with the use of expressions (mask, role …) and establishing rules for group communication. Our goal was to foster a certain attitude that allows a proper dealing with personal needs and stuff, while being honest and impolite in an most polite way. We believe if my personal „I“ feels safe and accepted I am more willing and therefore more able to be clearly social and supportive for the community.

Developing a group language for supporting the „Taking over“

JÜRGEN HABERMAS developed once a system of „Sprechakte“ related to former research of „Austin und Searle“ where he introduced „validity claims:

His interest in „Language Philosophy“ as part of his Theory of Society was to research „acting“ as a certain verbal expression based on standards and rules, which need to be interpreted and understood for achieving meaning and sense.
(HABERMAS: Vorstudien und Ergänzungen zur Theorie des kommunikativen Handelns, S. 17)
Inspired by HABERMAS we worked every day on language understanding using three languages (German, French and English) and sharing and playing around using a most precise way of expressing ourselves through body language and speech language.

For example: In the morning and whenever needed, we started the opening circle by naming the „mask“ each one is mostly in at that moment – by using the term „mask“ as a symbol for a feeling that is currently present. In this way the performer introduced her or his personal state to her or himself as well as to the group. The motive was on one hand to share essential information about oneself shortly before meeting the others on stage and on the other hand to give my player the permission to use everything what I find for the creation on stage.
A basic rule was to speak in a subjective way using „I“ in my speech instead of „you“ or „we“ to avoid projections and so called „general truths“.
Jungyeon and I were very clear about the importance of the „Taking over process“. As the second phase of the project began on Monday, we talked about the big change expected on Friday of facing the audience. So the coming five days were to be about working on the performance skills. And in parallel we were heading to increase the group ability to take over the responsibility for the closing performance.
We had talked in the earlier days of the project about the different phases of the process and mentioned that new themes for negotiation would pop up in the final days before the closing performance.

And the expected unexpected challenge came .. in the evening!

In the morning session we focused on „touch“ as an impulse for dance. 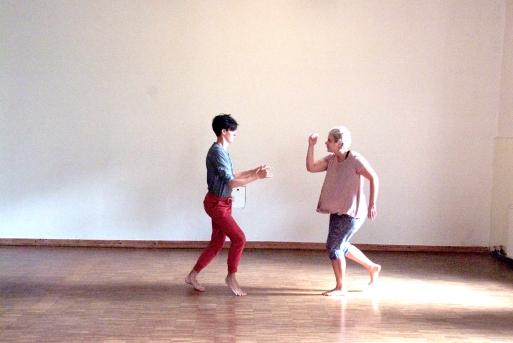 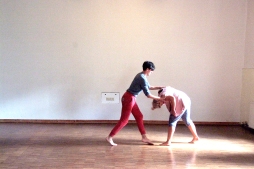 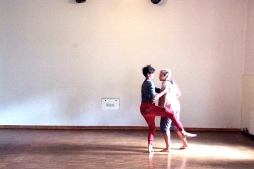 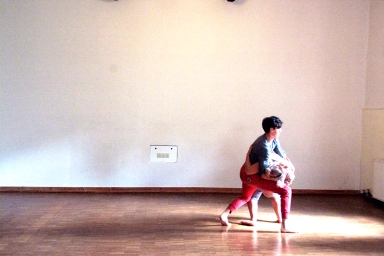 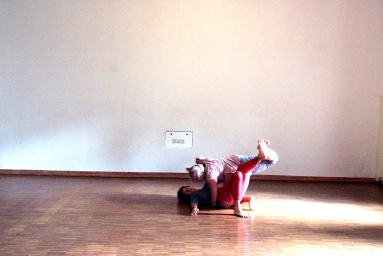 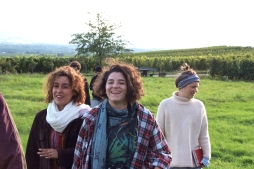 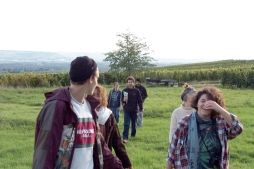 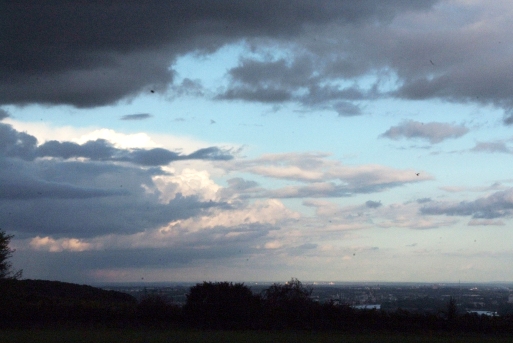 In the afternoon surprisingly the sun appeared and we spontaneously decided to walk out to visit the „Bubenhauser Höhe“, a beautiful hill looking down the river Rhein. In the past years we often used this location for outdoor nature experience. Only this time we felt quite limited because of the rainy weather.
On the hill the group got the task to prepare a solo moment related to the text work they had done in France/Aquitaine. Each chose a spot for his/her short performance. Two players missed this introduction – one because of her illness and the other because of the lack of time. These two did their soli later during the evening performance.
The afternoon out in nature was of great pleasure. On our way back home we met strong wind and rain, so that we were invited also to explore dancing in rain… 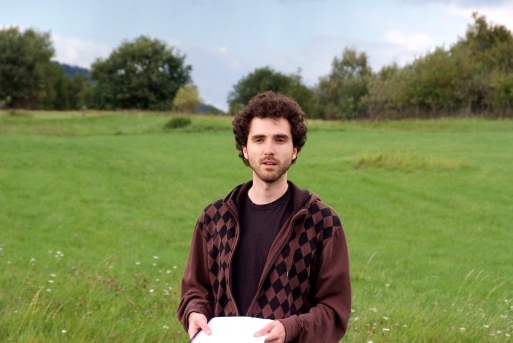 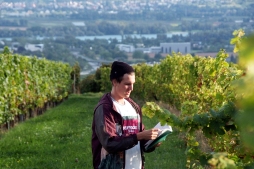 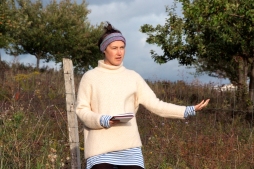 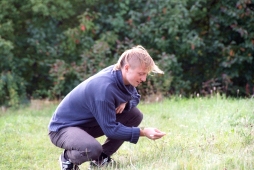 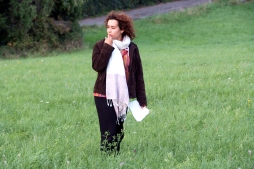 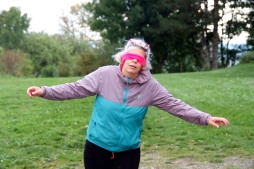 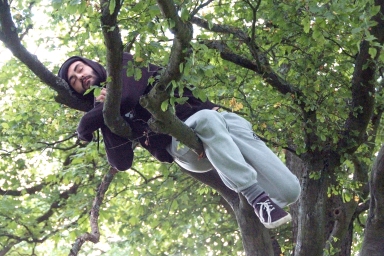 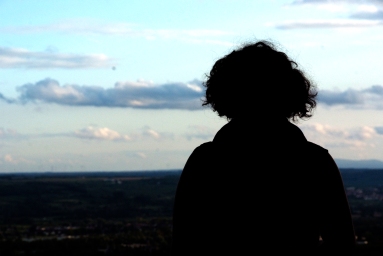 The long day was coming to an end… but there was something waiting to be cleared before. It came during the closing circle, when one performer dared to express her feelings around the current process. She said that at the moment there was a lack of time for her to deal with the work and she also needed time for her own stuff.
It opened a door that was meant to be open! It happened maybe because we were all full and tired from the day experience. Other player joined her and expressed similar needs for changing the schedule. Some were sad, because in the German part of the project there seemed to be less time for free creative research.
It didn’t feel easy to cope with that issue in a suitable way at that moment.
I felt the need to play my „facilitator and director mask“ being responsible for creating a performance for a public audience. So I stated that this part of the work is different from the one in France. The time in France was meant to be for group-forming through open creative plays and for starting a personal approach toward the theme „Suchen und Finden“. I did not say „no“ when some asked for having more free time. But I reminded the group of taking the responsibility as players to take care of themselves also for example by sleeping enough for being ready for the work. And I felt the need to be honest to say: the way we work is a performance style that the group needs to learn, so that they would have a satisfying playful evening with the audience.
I understood the wish of the group for changing the schedule. And I felt also that we should find an agreement that takes all needs into account. And that we should get a solution now to close this issue for the evening and the next days. We decided to start half an hour later every morning. For further change we needed some time to think about.
It felt highly logical as a part of the taking over process that the group started negotiating clearly about their needs.
The next morning we expanded also the afternoon break one hour longer. The group liked it a lot and were thankful for the change. We stated at this point that the group did the right thing in showing their readiness to take more responsibility and that they were achieving a step forward in the taking over process. From Wednesday to Friday we were aiming at one hour performance every evening, followed by feedback and enough breaks to recover and digest from the work.

The great FOOL, like EINSTEIN, wonders about the obvious and stands in awe to the ordinary, which makes him capable of revolutionary discoveries about space and time. The great FOOL lives outside the blinding circle of routine, remaining open to the surprise of each moment. We („or maybe only me – F.K.“) are the foolish ones, complacent in our understanding. We take take for granted the miraculous dance of creation, but the great FOOL continuously sees it as if for the first time. The revelations of the great FOOL often show us where we are going, or-more often – where we are. WES „SCOOP“ NISKER